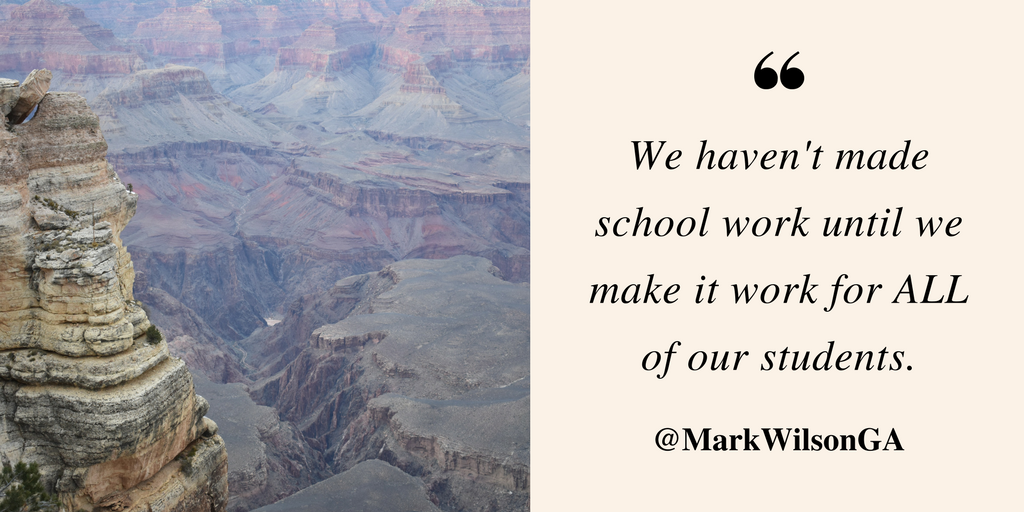 Scott Cowart is the Superintendent of Schools in Carroll County, Georgia and is an amazing leader with great creativity in helping leaders see all of the pieces around them.  A few years ago, he was talking about the need to reach and support ALL of the students in the system.  To illustrate his point, he displayed pictures of students on a screen while meeting with all of his system’s leaders.  He talked about the graduation rate for the county and reported the current percentage.  Then, on the screen, one-by-one pictures began to dissolve until the set of portraits on the screen matched the graduation numbers.

As the presentation unfolded and smiling pictures of students evaporated and were replaced with blank spaces, there was some audible sounds from the principals, assistant principals and other system leaders in the room.  You see, it wasn’t just any pictures Mr. Cowart had displayed: he had used photos of the children and grandchildren of people in the room.  As they watched the scenario, it brought home the point so clearly… all is a hard thing to talk about until your child or someone you love dearly is one of those who don’t make it through.

When I talk about the state of American education to groups or at conferences, I remind those in attendance that we are attempting to do something that no one else is doing in the world today and no one has done before in history.  No nation as diverse as ours has attempted to educate “all” neither now nor ever.

The groundbreaking educator Horace Mann (1796-1859) said that “the public school is the greatest discovery made by man.”  He said that education is best provided in schools “embracing children of all religious, social, and ethnic backgrounds.”

Reflecting on the concept of all students can give pause to teachers and administrators.  It’s easy to hear that word and think that goal is too lofty.  Critics and enemies of public education can use it in attempts to discredit our work, saying that we have fallen short of the mark.

But the concept of all children is one that should not be viewed with fear or anxiety by educators.  It IS our high ground that no one can reach without joining our effort.  It’s our connection to the best ideals of our past and the greatest promises of our future.  All means all and we should proudly continue our work, moving forward each day in the knowledge that our work will move the cause forward, even a step or two, to the promise that American education holds, which is not coincidentally the promise of America.

All is hard.  Students come to us with a great variance in abilities, interests, depth of interest in school, support systems, and emotions.  As President Theodore Roosevelt said, “the greatest prize that life has to offer is to work hard at work worth doing.”

Education… teaching… is hard.  Doing it for all is even harder.  But it is the great prize that comes to everyone who is honored to be called principal, assistant principal, school counselor, media specialist, teacher.  It is work worth doing, and work that needs you to do it.

You can see the Professional Standards for Educational Leaders in entirety here:  (http://www.ccsso.org/Documents/2015/ProfessionalStandardsforEducationalLeaders2015forNPBEAFINAL.pdf)