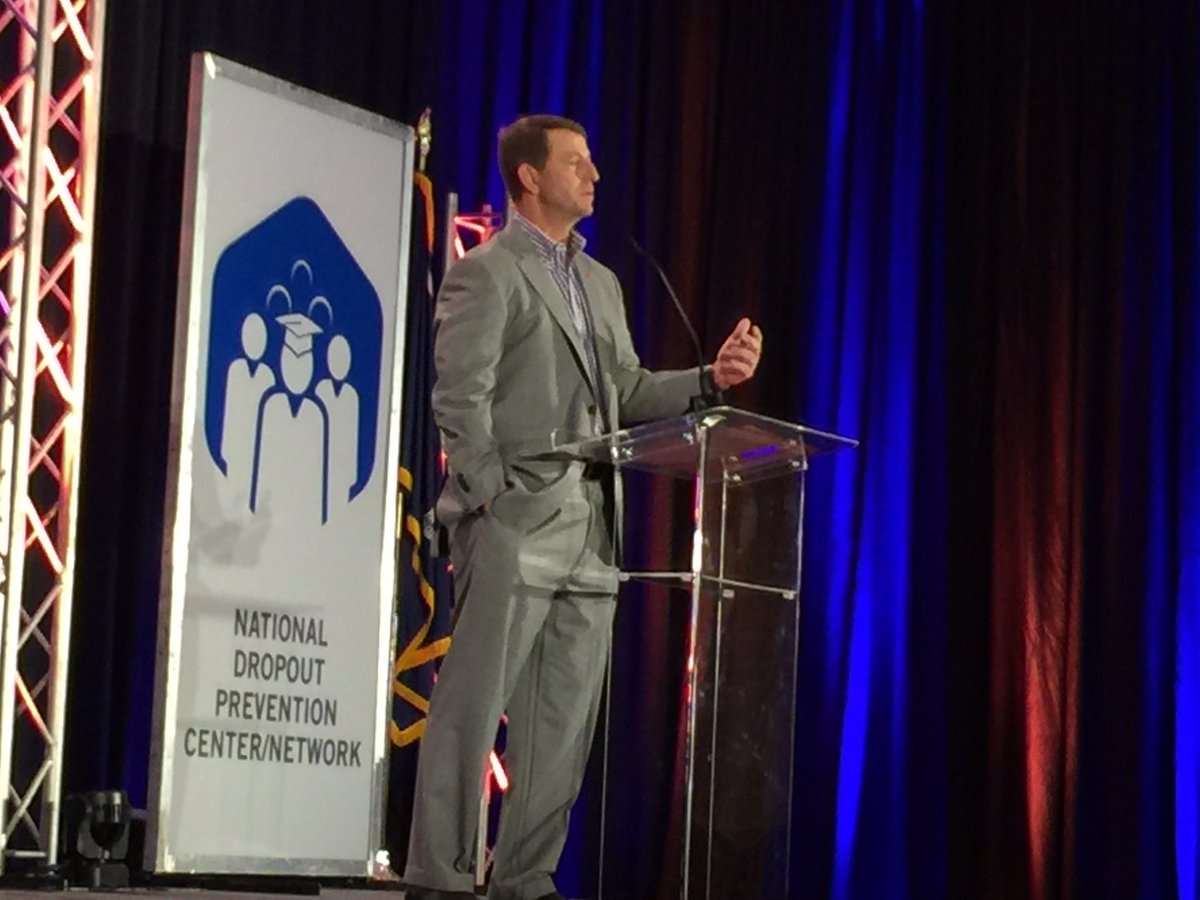 Put no limits on your dreams.  Don’t be afraid to fail.  Prepare for the opportunity.
These were some of the things shared by Dabo Swinney as he offered the keynote presentation to the 29th Annual At-Risk Youth Forum held by the National Dropout Prevention Center in Myrtle Beach, SC today.
Swinney, the Head Football Coach of the National Champion Clemson Tigers, talked for about an hour to the over five hundred educators in attendance.  His message was less about football and more about making a difference in the lives of others, particularly young people who are at-risk.
“I never really thought about like this, but I’ve been at-risk all my life,” said Swinney in his opening remarks.  “Without my coaches and teachers, there’s no telling where I would have ended up.  I’m on this stage today because I was first on the graduation stage.  I’m here because I got my education.”
Swinney’s personal story is one of triumph against adversity.  He grew up in poverty and through the direction of those around him kept moving forward towards success.  He credits his progress through life to those around him who spent time with him, had high expectations, and helped him see a different outcome.
Coach Swinney shared that being at the National Dropout Prevention Center’s conference was a great fit for him, because he could identify both with the students the NDPC’s work targets as well as the educators who work to help students graduate.  In introducing Coach Swinney, Clemson University College of Education Dean George Petersen said that he respected Swinney for his success with his players academically.  “He graduates his players,” said Petersen.
At the conclusion of the inspirational keynote, Coach Swinney shared a list of things he said he had learned from his career in coaching football.  Here’s Dabo’s list:

1.  Put no limits on your dreams.
2.  Work harder than your competition.
3.  The fun is in the winning but it’s how you win that matters most.
4.  Aggressiveness is a great thing. (Some people make it happen, some watch it happen ,
some say what happened?)
5.  Surround yourself with good and tough people only.
6.  Find humor in everything it will win half the battles.
7.  Arrogance is an ingredient for failure.
8.  Live in the weeds.
9.  Don’t be afraid to take risks .
10.  Don’t be afraid to fail.
11.  Nothing great will happen without passion and enthusiasm.
12.  Need a spiritual foundation to survive.
13.  Key to success is to care about your people and serve their heart.
14.  No excuses.
15.  Be responsible for your own happiness.
16.  Don’t worry who gets the credit.
17.  Embrace team. (Together Everyone Achieves More)
18.  A great way to improve your team is to improve yourself . (When you’re through improving,  you’re through)
19.  You must have ethics to last
20. Get things done;  If you don’t, they won’t.
21.  Set the example; You never know who’s watching
22.  Prepare for your opportunity
23.  It’s all about the little things.
24.  Do the common things in an uncommon way and you’ll gain the attention of the world
25.  Bloom where you’re planted
26.  Be great at whatever it is you’re doing
27. Turn liabilities into assets
28.  Better have some thick skin. Don’t be soft
(By my count, Coach Swinney listed 28 things he had learned coaching football.  Clemson University has just completed a two-year run of winning the most games in school history in that time period.  The total of wins?  28.)
~MW
#Leadership365  /52

One thought on “National Coach of The Year Shares Lessons Learned”