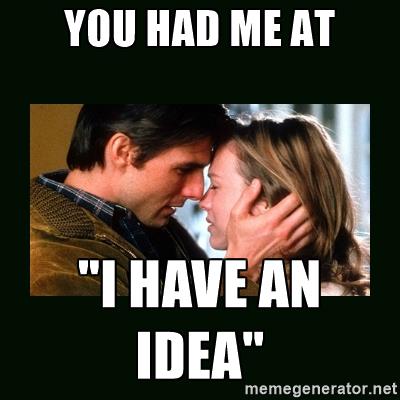 Ideas are incredible, and they are literally everywhere around your school this very minute.  The problem with a lot of those ideas is this:  their owners aren’t going to share them with you.

Your school is either a fountain or a drain.  It’s either a place where ideas are appreciated, encouraged, and valued or a place where people learn to keep their ideas to themselves.  So much of the climate for ideas, or lack of one,  begins with the principal and administration.

What do you do when someone has an idea?  Do you make things easier for them or more difficult?  Are you an idea accelerator or are you the brakes?

I know that you are called upon to be the leader of a safe, orderly school.  That is important and shouldn’t be taken for granted or lightly. Orderly can be good if used in the right measure. Order is easier to administer than freedom, and that’s why most schools lean towards a more structured, policy-driven model of administration.  The problem is this:  if you lean too far in that direction, you’ll end up with a place where the rules outweigh the ideas.  If it’s hard to get permission to move forward with an idea, the ideas will stop showing up.  The converse is true as well; if ideas are welcomed, you’ll have more and more of them.

At our school and at most schools everywhere, people have great ideas.  Teachers, students, and staff have great ideas and innovations just waiting to be heard.  At Morgan County High School where I was principal, we were having our annual “Club Fair” for our organizations to showcase who they are, what they do,  and solicit members.  One of our people had a great idea:  let’s do it outside and set it up with tables, music, food much like a festival.

That idea turned out to be a great one; the students enjoyed being outside, it was during our lunch periods so the clubs had a great turnout at their booths, and everyone had a chance to be creative in showing their wares.

While at this inaugural Club Fair, a student started talking to me.  I asked him what he thought about the Club Fair and he said that it was good.  He said that it was so good that we ought to do it every week!  I asked him “what would that look like?”   He said, “we don’t need to advertise clubs every week, but we could have bands.  Students who play guitar and sing can do it out here.  And we can have a snow cone booth.  And it’ll be awesome.”

From that conversation was born a tradition at our school.  “Friday Alive,” a mostly-weekly (weather-dependent on whether it was weekly) celebration of creativity, fun, and student talent.  We’ll take a deeper dive on Friday Alive in a future post, but it was a place for student performers to share their work; we had poetry jams; the marching band was a guest performer; the step team; the cheerleaders; even our versions of “The Voice” and on occasion Karaoke Friday.  Friday Alive was, as the student described it to me to begin with, awesome.

Here’s the thing:  that idea probably never rises up unless he was a part of a climate and culture where ideas matter.  Here are a few reminders to the principal and assistant principal about making your school an idea factory:

As the principal, you are in a privileged position.  You literally have a creative team filling the classrooms around you.  You can do awesome things at your school if you embrace the idea and idea maker.  Whenever you hear those words, “I have an idea,” be ready to be what they need to make those ideas reality.