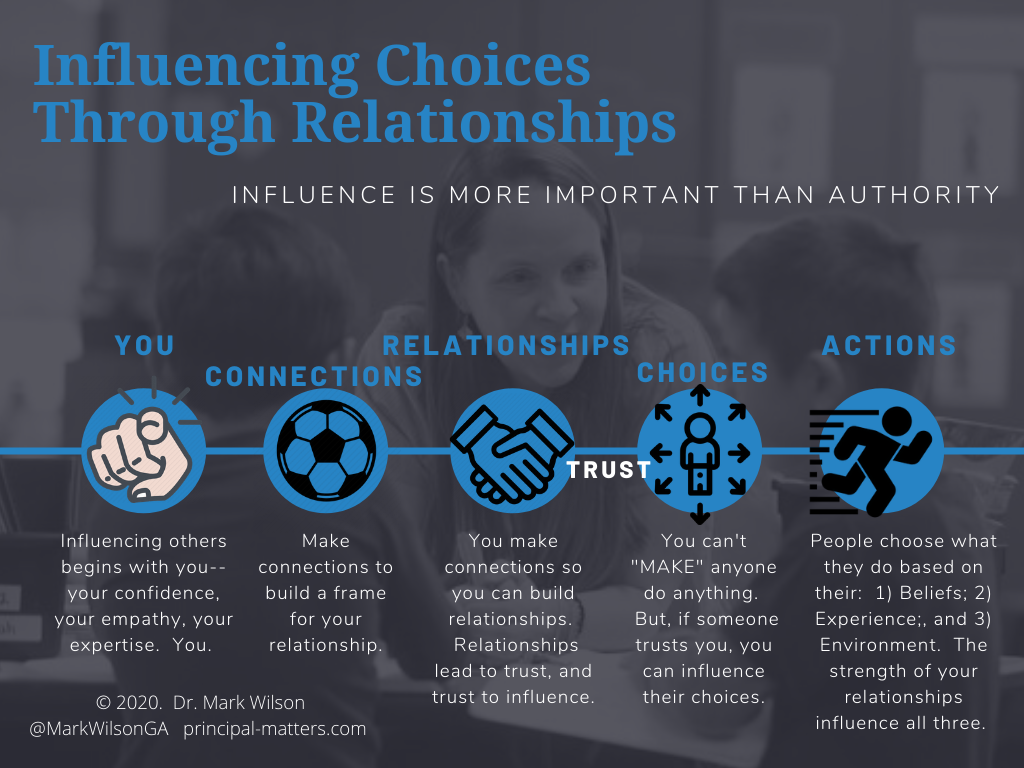 One of the most common leadership mistakes is thinking you’ll get maximum performance from others without first building relationships with them. As school leaders, our success is measured not only by our own actions but even more so by the work of those we lead. The same is true of our teachers and their students.

What is it that relationships do? They give you access to the key to leadership: influence.

If you want to lead other people as a teacher leading his class or a principal leading her school, you want to become a powerful influencer. The reason being, you can’t make anyone do anything they don’t want to do. Using your authority, you can make things uncomfortable for others in their decisions, but going along with you is still a choice for them.

So why do people do what they do? Here are three things that influence our choices: 1) beliefs; 2) experience; and 3) environment.

Whether we’re thinking of students or adults, most of the choices that are made each day in your building are filtered through each person’s beliefs, previous experiences, and perception of the environment.

“The key to successful leadership is influence, not authority.“

So, as leader (or teacher), you can run yourself ragged spending all of your time hyper-focused on the choices (also known as behavior) of those you supervise and serve. Where our time would be more wisely invested would be in developing relationships instead of directing actions. Some actions, obviously, require immediate attention or redirection, but until the student (or teacher) changes beliefs, gains new experiences, or is presented with a changed environment, their choices will most likely remain as they are.

Instead of making them do, influence them so they’ll want to do.

Back to influence. Think about the people in your life who influence you. What is true about them? Most likely, you’ve developed some sort of relationship that has led to trust. When we trust someone, we are willing to believe them, to be influenced by them.

Student behavior can be influenced through relationships more effectively than it can be controlled by rules.

If we know the power of influential relationships, why does it remain the road less traveled? Why do we rush to an insistence on other people’s behaviors when we can influence them for good through relationships?

Relationships take time, energy, and a lot of upkeep. But then again, mandating behaviors from students or adults takes a lot of the same. It’s something to consider though: would your time and energy be spent more effectively influencing those you’ve build trust with or insisting behavior from those you haven’t?